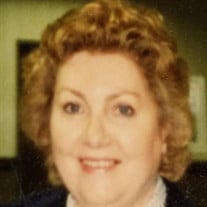 Barbara L. Kasprzak, 88, of North Tonawanda, passed away July 26, 2019 at the Buffalo General Medical Center. Barbara was born July 31, 1930 in Dickinson Center, New York, daughter of the late Jones and Alice Palmer. She was predeceased in death by her loving husband of 57 years, Raymond J. Kasprzak and her sisters, Shirley Sheppard, Betty Pudsey and Donna Papp. Barbara was a faithful servant of Jehovah for over 73 years. Barbara was a devoted wife and mother and loved to read; however, she was best known for her service to Jehovah and her study of his word, the Bible. Right up until her death, she continued to read and study, attend meetings and participate in the ministry. Barbara is survived by her two children, John J. (Karen) Kasprzak of Farmington, New York and Nancy Sue (Charles) Fullard, Jr. of Snow Hill, Maryland, and her sister Evelyn (Joe) Gehl of North Tonawanda. She is, also, survived by her grandchildren, C. Oliver (Sandra) Fullard III, Zechariah J. Fullard, Raymond A. Kasprzak, Jesse C. (Autumn) Fullard, Brandy L. (Phothria) Xayavong; great-grandchildren Isaac J. Fullard, Maxwell J. Fullard, Brielle F. Fullard, Duncan C. Fullard, Madison E. Powell, Ryder L. Fullard, Liliya Xayavong, and Savannah Rose Fullard; and nieces and nephews. Barbara is, also, survived by Felicia S. (Michael) Conti who she held in her heart as her granddaughter and as great-grandchildren James G. Conti, Marcus A. Conti, and Sean Conti. We are forever grateful to Felicia for making it possible for Grandma to live out her years in NT. We, also, extend our thanks to the friends in the NT and Wheatfield congregations for the time, effort and love they showed to Barbara with special mention to Wendy (Ralph) Critelli who helped look after “Aunt Barb” for over 20 years and to her best friend, Georgiana (James) Dormer. A memorial service will be held on Sunday, August 4th at 5:00 pm at the Kingdom Hall of Jehovah’s Witnesses, 7375 Nash Road, North Tonawanda – Wheatfield Congregation. In lieu of flowers, contributions may be made to the Wheatfield Congregation. Arrangements by the Wattengel Funeral Home (692-0440).

Barbara L. Kasprzak, 88, of North Tonawanda, passed away July 26, 2019 at the Buffalo General Medical Center. Barbara was born July 31, 1930 in Dickinson Center, New York, daughter of the late Jones and Alice Palmer. She was predeceased in... View Obituary & Service Information

The family of Barbara L Kasprzak created this Life Tributes page to make it easy to share your memories.

Send flowers to the Kasprzak family.