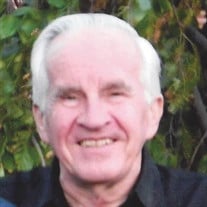 After a brief hospitalization, Pastor Donald R Lacey was called home to Heaven in the early morning hours of Monday, March 26, 2018. Donald was born to Rachel Frome Lacey and Milton Wilbur Lacey, Wednesday, January 30, 1935 in Washington, New Jersey. Donald worked diligently as a paperboy throughout childhood in New Jersey, saving enough money from his earnings to purchase his first vehicle. A cherished accomplishment. Great passion to serve the Lord, lead to his choice to become an accredited Pastor for the Assembly of God Church. Upon graduation, he began service at various churches, including Bridgeton Assembly of God located in Bridgeton, NJ and Abundant Life Assembly of God, located in North Tonawanda, NY. Donald enthusiastically dedicated over 40 years of service to the Lord, continuing to share sermons and messages from God well into 2018. During his first marriage, Donald and his beloved wife, Betty (Metz) Lacey traveled extensively within, and outside the United States of America, often accompanied by their children. During this time, Donald enjoyed both photography and golf as hobbies, while collecting souvenirs and artifacts from his family journeys. Donald and Betty relocated to North Tonawanda, NY once their children reached adulthood. While Pastoring at Abundant Life Assembly of God, Donald aspired to reach each neighbor within his community, by knocking on every single door in North Tonawanda, NY, to share his love for Jesus Christ, the Son of God. At times, his intentions were not well received, however, even a call to the Police did not dissuade him, and he, with a small team from his congregation, eventually met his goal with great pride. After losing Betty, Donald was joined in service, and in life, by his treasured second wife, Jean (Janowsky) Lacey. Working as a team, Donald and Jean ministered together in song, sermon and worship. Donald remained steadfast and dedicated to the cause, even if it meant at times that he would be called upon to serve as both teacher and tradesman, painting a wall, repairing a toilet or shoveling the walk. Upon retirement, Donald and Jean continued to lead a small group within their home “Full Gospel Fellowship” offering services each Sunday morning. Donald is survived by his wife, Jean R (Janowsky) Lacey, two daughters, Donna (Lacey) and Jim Brady and Susan (Lacey) and Gino Richards, step-daughters, Melinda (Grawe) Brohman and Shannon (Grawe) and Donald Booth; brothers, Joseph and Alberta Lacey, Dale and Pearl Lacey and their only sister, Virginia (Lacey) and Jacob Landis; his (4) grandchildren the apple of his eye, Gene Richards, Esq., Donald Richards, Rachel Richards and Sarah Richards; (9) step-grandchildren, and (2) great-grandchildren; numerous family and friends. A small gathering to honor Pastor Lacey will be held in his home Tuesday, March 27, 2018 at 6 pm. He will be laid to rest in Washington, New Jersey. The family requests that in lieu of flowers, donations be made in the Pastor’s name to Buffalo Teen Challenge. An agency that was near and dear to the Pastor’s heart.

The family of Pastor Donald R Lacey created this Life Tributes page to make it easy to share your memories.

After a brief hospitalization, Pastor Donald R Lacey was called...

Send flowers to the Lacey family.