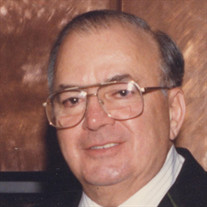 Family, friends and loved ones, it is with heavy hearts that we announce the passing of our father, Donald. Sonny, as many of you know him, went peacefully in his sleep after a short hospitalization, joining our mother Ann, who he missed dearly, nearly four years after her passing. All of you who knew dad will remember his ever-pleasant attitude, kindness towards strangers, generous heart, and unbounded love for his family. He held three to four jobs at a time since he was barely a teenager, first supporting his mother and then his wife and children. He delivered papers, shucked clams, delivered milk, polished shoes, laundered linens, sold insurance, and at Bell Aerospace started as a janitor and worked his way up to quality control manager. He was a night concrete foreman on the Niagara Power Project. He told stories of coming off his shift in the early hours of dawn and heading to the local saloons. He saw more than one fellow worker lose their lives under the massive concrete buckets. He was a unionist, and after Textron shut down Bell and moved jobs to Mexico, he, in his retirement, with fellow union members, formed a “Networking Club” to help find jobs for his unemployed younger colleagues. In spite of all the work, he managed to find time to spend with his family. Picnics, horseshoes. bocce, beer and barbecue. He always made sure you were fed and had a drink. He loved to garden, planted a huge garden in the back of our yard for years, and then enjoyed his time helping Sandy and Carl bring their produce to the market. He was proud to be a Sicilian-American, and he was thrilled to meet after so many decades his cousins in the “old country”. I had the privilege of traveling to Europe with dad and my brother Joe in 1994, seeing our cousins in Sicily and Belgium, and visiting Spain and northern Italy. Those are among my most cherished memories. Cousins that we had never met welcomed us as if they had known us all our lives. Dad was a 1st chair trumpet player by the time he became a teenager. He was a member of the NY National Guard, and in 1953 at the rise of the Korean War, enlisted in the Army. The recruiter asked him if he could play french horn, and of course he said yes (though he had never touched one). He was stationed with the the 82nd Airborne Division Band Fort Bragg. Dad is survived by countless grandchildren and great-grandchildren, and he cherished every one of them. Nothing made him smile more than seeing pictures of his new grandbabies. We will miss him, while each of us who knew and loved him carry a piece of him in our hearts. —Domenic

Family, friends and loved ones, it is with heavy hearts that we announce the passing of our father, Donald. Sonny, as many of you know him, went peacefully in his sleep after a short hospitalization, joining our mother Ann, who he missed dearly,... View Obituary & Service Information

The family of Donald A Licata created this Life Tributes page to make it easy to share your memories.

Family, friends and loved ones, it is with heavy hearts that...

Send flowers to the Licata family.