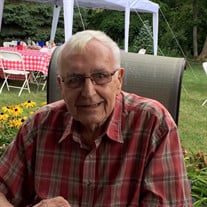 Dr. Thaddeus F. Reszel Jr., North Tonawanda Physician Thursday (September 20, 2018), Thaddeus F. Reszel Jr., passed peacefully in the presence of his loving daughters at the age of 90. He was a well-known and popular physician who, with his brother, Robert, followed in the footsteps of their father by practicing medicine in North Tonawanda. It is estimated that between them, they provided care for a century of families residing in the Tonawanda area. His brother Paul also practiced medicine in Fort Wayne, Indiana. A native of North Tonawanda, he was a graduate of the State University at Buffalo and UB Medical School. He served his internship at Ohio State University Hospital in Columbus, Ohio and a residency in general practice at Millard Fillmore Hospital. He served in the Navy and after his discharge, received a staff appointment at DeGraff General Hospital. He had a general practice until his retirement in 1996. He enjoyed travelling, fishing, model making and opera and frequently attended concerts. He fancied himself a poet and amateur magician, and entertained his family, friends and grandchildren with card tricks and special poems at Christmas. He was married in 1956 to the former Alice Schneider, who died in 2005. Dr. Reszel is survived by his daughters Susan (Peter) Hoelter, and Mary Latona, brother of Paul (Rosemary) Reszel, Margaret (the late John) Cegielski, and the late Robert (Mary Ann) Reszel, grandfather of Meredith and Morgan Kissel, Christopher (Stacy) Hoelter, and Melanie (Joe) Levine, also surviving are many nieces and nephews Friends may call Sunday from 5-9 P.M. at the Wattengel Funeral Home, 533 Meadow Drive, North Tonawanda, Mass of Christian Burial will be held Monday at 9:30 A.M. from Our Lady of Czestochowa, 64 Center Ave, North Tonawanda, NY 14120.

The family of Dr. Thaddeus F Reszel Jr. created this Life Tributes page to make it easy to share your memories.

Send flowers to the Reszel family.