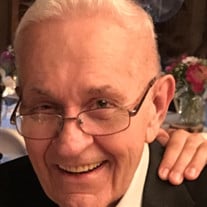 Edward John Wodjeski was born January 3, 1944 in Niagara Falls to John E. Wodjeski and Stella Chrzanowski. He died peacefully on Monday, June 25, 2018. In 1965, Ed eloped with the love of his life, Elizabeth. In 2015, their children and grandchildren threw them an anniversary party as memorable as any wedding. They lived their vows each day in the way they cared for one another. Ed enjoyed a 50-year career as an accountant at Conbow Corporation/Benchmark Group, where he was respected and admired by his colleagues. However, his proudest accomplishment was his beautiful family, and his favorite pastime was spoiling his grandchildren, no matter their ages. He never missed a performance, a game, or a birthday if he could help it. In addition to his parents, Ed joins his brother, David Wodjeski, and his sister, Christine Wodjeski in heaven. He is survived by his wife, Elizabeth, his brother, Stephen (Tracy) Wodjeski, his three children, Amy (David), John (Wendy), and Timothy (Kate), and his eight grandchildren, Rebecca (Tom), Jacob (Valentina), Emily (Andrew), Maya, Joseph, Ava, Callahan and Edward. Ed’s kindness, gentleness, and sense of humor will be deeply missed, and his family will continue to tell all his favorite stories. A wake will take place on Friday, June 29 from 2:00-4:00 and 7:00-9:00 p.m. at Wattengel Funeral Home, 533 Meadow Drive, North Tonawanda. A funeral mass in his honor will be held on Saturday, June 30 at 11:00 a.m. at St. Stephen Roman Catholic Church on Grand Island. In lieu of flowers, Ed’s family asks that memorial donations be made in his name to the charity of your choice.

Edward John Wodjeski was born January 3, 1944 in Niagara Falls to John E. Wodjeski and Stella Chrzanowski. He died peacefully on Monday, June 25, 2018. In 1965, Ed eloped with the love of his life, Elizabeth. In 2015, their children and grandchildren... View Obituary & Service Information

The family of Edward J Wodjeski created this Life Tributes page to make it easy to share your memories.

Send flowers to the Wodjeski family.