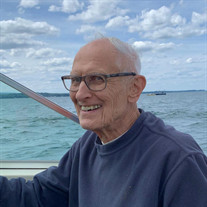 Eugene S. Pasciak Of North Tonawanda, entered into rest on March 13, 2022 Son of the late Stanley and Frances (nee Janda) Pasciak Beloved husband of the late Shirley (nee Snopkowski) Pasciak; loving father of Ken (Sayaka Abe) Pasciak, Pam (Brent) Patterson and Jackie (Bob Stephens) Pasciak; devoted grandfather of Kia Pasciak, Mikah Patterson and Konan Pasciak; brother of James (Shannon) Pasciak; also survived by nieces and nephews. Gene was a brilliant engineer who had a highly successful career at Harrison Radiator, although he was a modest and thoughtful man who was always considerate of those around him. He could build anything without plans, and was available without fail to lend a helping hand to family, friends, and neighbors, or just making clever decorations for them as tokens of his affection. His woodworking designs included Bills and Sabres decorations, small benches for the grandkids and neighborhood kids, even full sized bookcases. Every kid in his life had the chance to fly one of his homemade kites. His work ethic was legend in the Pasciak family, and he was constantly on the move with the next project or plan, whether it was working on his cottage at the lake, fishing with his brother Jim in his pristine boat, or growing his home garden or going to the casino with beloved wife Shirley. While he was supremely proud of his children, Ken, Pam and Jackie, his special joy were his grandkids, Kai, Mikah and Konan. He loved nothing more than to spend time with them, to boast about their successes to others, and learned the tech to communicate with them long-distance, so as not to miss any milestone in their lives. A humble man of humble tastes, Gene was very proud of his Polish heritage, loved Polish food, and adored his polka music programs on the radio. He loved sitting around the kitchen table exchanging funny stories and photos of dearly departed relatives, and celebrating with his family holidays like wigilia with delicious Polish and Hungarian food prepared by Shirley. His tastes in music were eclectic, and he enjoyed showing everyone who sat around his kitchen table videos of his grandkids Kai and Konan performing in their jazz band, and exchanging with his cousin Kathy the best radio stations and DVDs of Big Band music (a shared love of both of them). Gene was a smart, thoughtful, and giving person, and while we are bereft he has left us, we are happy he is now at peace with his beloved wife, Shirley, his parents, Stanley and Frances Pasciak, and all his aunts and uncles. Visitation Wednesday March 16th from 2 to 4 and 6 to 8 PM at the WATTENGEL FUNERAL HOME, 533 Meadow Dr. North Tonawanda. A Mass of Christian Burial will be held Thursday March 17th from St. Christopher’s RC Church, 2600 Niagara Falls Blvd at 9:30 AM (please assemble at church). Flowers gratefully declined; memorials may be made to Us TOO Zero-the end of prostate cancer, www.zerocancer.org/ustoo

Send flowers to the Pasciak family.