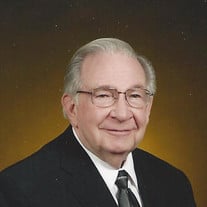 Frank Earl Wright was born July 16, 1929 at home in Fombell, Pennsylvania. His sisters were sent to a neighbor's house and told that there would be a surprise waiting for them when they came home. When they took one look at the new arrival, they were disappointed. They thought that they were getting a pony for their surprise. Frank was named after a work horse, and was reared on a farm that did not have electricity until he was around 10 years old. He attended a one room country school which had one teacher for all 8 grades. Frank graduated from Lincoln High School in Ellwood City, PA and also from Geneva College in Beaver Falls, PA. He went on to Pittsburgh Theological Seminary where he met Dorothy Burley, who was studying Christian Education. The real truth is that Dorothy's mother sent her to seminary to find a husband. She claims the "pickins were slim". They both graduated on May 17th, 1956 and were married the next day in the seminary chapel (May 1 8th, 1956). Frank received a call to serve at Wayside United Presbyterian Church in Wanakah NY. He started as an assistant pastor and then became the associate. While there he attended clinical pastoral training courses which qualified him for the chaplaincy first at Our Lady of Victory Hospital in Lackawanna and later at DeGraff Memorial Hospital in North Tonawanda. During his tenure at Wayside, Dorothy and Frank had two daughters, Pamela and Marcia. After serving for nine years at Wayside, Frank received a call to become the pastor at North Presbyterian Church in North Tonawanda. Frank was active in the Presbytery of Western New York serving as chairman of various committees. While at North Church, Frank helped establish the Twin Cities Community Outreach (TCCO) an organization bringing together the Food Pantry, Clothes Closet and Meals on Wheels under one roof. He served as president of the Board of Directors. Bonnie Orbin became their foster daughter while at North Church and is currently the Co-Ordinator for the Food Pantry at TCCO. After retiring from North Church in 1992, he served as part-time pastor at Bacon Memorial Presbyterian Church, North Park Presbyterian Church and Curtis Park Presbyterian Church. Frank also enjoyed his clown ministry for many years. His name was Barnabas which means "son of encouragement". Frank and Dorothy made many new friends at their home at Weinburg Campus in Getzville. Beloved husband of the late Dorothy (nee Burley) Wright; devoted father of Pam ( Charly) Kelly, Marcia (Randy) Westphal and Bonnie (Kim) Shaffer; grandfather of Charlie Kelly, Colleen Rau, Sarah Westphal, Bethany Klimuk and Della Reiller; great grandfather of Aubrey and Bryson Hummel, Vincent, Anthony and Remington Reiller, Evelyn Mae Klimuk and Amelia Rae Kelly; brother of the late Mildred ( late Walter) Young and late Nancy Wright. Visitation Wednesday 4 to 8 PM (August 1, 2018) at the WATTENGEL FUNERAL HOME, 533 Meadow Dr. N. Tonawanda. Memorial Services will be held Thursday (August 2, 2018) at 4 PM from North Presbyterian Church, 168 Payne Ave. N. Tonawanda. Private interment Forest Lawn Cemetery. In lieu of flowers, memorials to Twin City Community Outreach, 100 Ridge St. N. Tonawanda NY 14120

Frank Earl Wright was born July 16, 1929 at home in Fombell, Pennsylvania. His sisters were sent to a neighbor's house and told that there would be a surprise waiting for them when they came home. When they took one look at the new arrival,... View Obituary & Service Information

The family of Rev Frank E Wright created this Life Tributes page to make it easy to share your memories.

Send flowers to the Wright family.