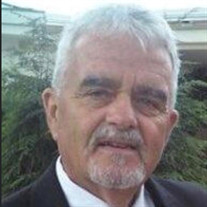 Captain Glenn D. Gardner, 74 of North Tonawanda Sunday (December 13, 2020) in Millard Fillmore Suburban Hospital. Glenn was born in Niagara Falls, NY on December 1, 1946 to Robert and Lillian (Park) Gardner. Captain Gardner graduated from Niagara Falls High School in 1964. Following his high school education he obtained Associates Degrees in Business Administration and Police Science, and a Bachelor's Degree in Criminal Justice. Captain Gardner dedicated his life to service. In 1968 he joined the United States Army and attained the rank of Sergeant before being honorably discharged in 1974, after two years of active duty and four years of reserve duty. In 1972 he joined the University of Buffalo Campus Police Department where he remained until he was hired by the North Tonawanda Police Department on November 16, 1977. He worked in the Patrol Division until he was promoted to Detective in 1988. Ten years later he was promoted to Captain where he commanded the Patrol Division until his reassignment to “Chief of Detectives” in 2000, where he remained in command of the Detective Bureau until his retirement on January 4th, 2002. Captain Gardner was one of the lead detectives in the William Rickerson homicide investigation that led to the arrest of Richard Matt and was awarded the Exchange Club “Officer of the Year” award in 1998 for his sound investigative efforts in that case. He has numerous letters of commendation in his personnel file and was a true leader in the North Tonawanda Police Department. Captain Gardner was predeceased by his beloved wife Donna Gardner, brother Robert Gardner and brother in law Robert Stevens. Captain Gardner is survived by his daughters Melanie (Dave) Riester, and Pamela Gardner, former husband of Rosemary (Sawma) Gardner, stepfather of Gina Anastasi, and Mark (Dawn) Anastasi, Brother of Arlene Stevens, Patricia (Wally) Whetham, and brother in law of Shirley Gardner, and Ron (MaryJo) Tamburlin, grandfather of Ashley, Alexis, and Amber Riester, step grandfather of Tyler Croll, Nicole Anastasi, and Kristen (Peter) Scharlock, also surviving are many nieces and nephews. A celebration of Captain Glenn Gardner's life will be held Thursday, July 22, 2021 from 4-8 P.M. at the Wattengel Funeral Home, 533 Meadow Drive, North Tonawanda. If Desired Memorials may be made to the North Tonawanda Police Benevolent Association.

The family of Capt. Glenn D. Gardner created this Life Tributes page to make it easy to share your memories.

Send flowers to the Gardner family.