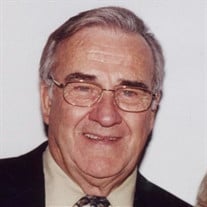 Harold William Ford August 29, 1925 - May 21, 2019 Former civil engineer and long-time resident of North Tonawanda, Harold W. Ford, 93, died peacefully on Tuesday, May 21, 2019, surrounded by his loving family at his daughter’s home in Wilson, NY. Mr. Ford was born August 29, 1925, in Stratford, Ontario, Canada to William E. and Mabel A. (Reyss) Ford. He served in the Canadian Army and Air Force during WWII in 1945. Shortly after the war ended Harold enrolled in the University of Toronto where he earned his degree in Civil Engineering, a passion which followed him throughout his life. In Toronto Harold met his future wife from Rochester, NY, Carol E. (Keil) Ford, while she was visiting family there. After a romance straddling two countries, Harold and Carol married in 1951 and settled in upstate New York. They celebrated their 67th wedding anniversary in October 2018, and have been blessed with four children, 8 grandchildren and 14 great-grandchildren. For over 60 years Harold and Carol lived in North Tonawanda, NY, where they shared many wonderful memories. Harold was a passionate man who was devoted to his wife, family, friends, his engineering firm (Ford Pile Driving), and his faith. In the summers you could find him fishing at Wolfe Lake in Ontario, Canada, or BBQing in his back yard while he watched his family and friends splashing around his built-in pool, which brought him great joy. He was an active member at Abiding Savior Lutheran Church in North Tonawanda, where he previously served as Church Council President, and co-chair of the church’s expansion committee. Harold is survived by his wife Carol E. Ford; daughters Barbara L. Zapalowski, Christine E. Ford, Catherine A. Ford and son Jonathan D. Ford; brother Gordon E. Ford and sister Audrey J. Phillips; his grandchildren, great-grandchildren and numerous nieces and nephews. Donations in his memory may be made to Abiding Savior Lutheran Church, 1534 Ruie Rd, North Tonawanda, NY 14120. A memorial service will be scheduled for a later date.

The family of Harold William Ford created this Life Tributes page to make it easy to share your memories.

Send flowers to the Ford family.