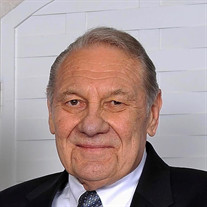 Known for his prowess on the basketball court, his ability to catch baseballs with his bare hands while coaching his sons’ teams, a booming voice as a Eucharistic minister and an encyclopedic knowledge of New York state’s gasoline supply and demand, James Francis Kuryak passed away Monday, 19 February 2018 at the age of 75 surrounded by his loved ones. Born on August 28, 1942 and raised in Lackawanna, Jim was the son of the late Joseph & Frances (Lis) Kuryak, older brother of John, Michael (Kimberly) & Joseph (Andrea). In his hometown, Jim’s athleticism was evident early on, as he played numerous sports at Baker Victory, where he was ultimately honored as an inductee into the high school’s Hall of Fame. Earning a four-year scholarship for basketball from Niagara University, Jim - or “Gunner” as his teammates nicknamed him - played for the University from 1960-64, and was Captain of the Division 1 team in his final year. He graduated in 1964, earning a degree in Business as an accounting major. Jim put his business degree to work as a 37-year veteran of Mobil Oil, where he was District Sales manager of New York State. He’s lovingly remembered as a frequent fixture at the Mobil stations he called on, chatting with his clients over a cup of coffee, not to mention sitting at his kitchen table setting gas prices with daily calls - “Up a penny”; “Down a penny” - like the OPEC of Western New York. He was most proud, though, of his family of five children, James (and his wife Kathy), Mary Beth, Deborah (and her husband Art) Bradley, Mark and Timothy. During his children’s school years, Jim loved nothing more than taking day tips in his car to Rochester, Geneva, Boston and Providence, logging more than 50,000+ miles a year to watch his kids compete in their collegiate sporting events, along with ‘shorter’ 3-hour round-trip jaunts for pancakes during maple syrup season in central New York. While each of his children have individually become quite successful in their own fields and careers, it’s through their father’s hard work ethic and competitive spirit that allowed them to flourish and achieve as much as they have. As beloved husband to the late Josephine Douglas, and loving step-father to Nancy (Brian) Eckert and Jodi (Garry) Vermaas, Jim shared his late wife’s love of Disney, where they worked together at DisneyWorld in Orlando, looking dapper in their western-wear uniforms in Frontierland, greeting families as they sold photos as happy memories at Splash Mountain. In his retirement, Jim loved doting on his grandchildren, Grace & Grant Bradley, Sydney Giardino, Brian & Jackson Eckert, Garret, Jolyn, Shiya, James, William & Luxmi Vermaas, where each one had a colorful nickname for him, from ‘Turtle’ to ‘Alligator’ to ‘Polar Bear’. He also enjoyed volunteering his time at the local Florida chapter of the Special Olympics, where he earned the honor of Volunteer of the Year in 2012. In lieu of flowers, a donation to Special Olympics Florida in his name would be accepted with heartfelt appreciation (https://give.specialolympics.org/page/contribute/florida) The family will receive friends on Friday, February 23rd, from 4-8p at Wattengel Funeral Home,

Known for his prowess on the basketball court, his ability to catch baseballs with his bare hands while coaching his sons&#8217; teams, a booming voice as a Eucharistic minister and an encyclopedic knowledge of New York state&#8217;s gasoline... View Obituary & Service Information

The family of James F. Kuryak created this Life Tributes page to make it easy to share your memories.

Known for his prowess on the basketball court, his ability to...

Customized sympathy cards. Mailed for you.