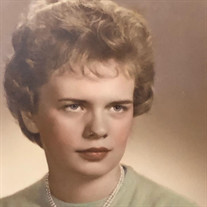 JANET (KLEIN) ANKENBAUER 1942-2020 Janet (Klein) Ankenbauer, 78, of Niagara Falls, died Saturday, December 5th, 2020 at Niagara Falls Memorial Medical Center. Janet contracted COVID 19 while receiving short term rehab services at Schoellkopf Nursing Facility. She was transferred to ICU and after a lengthy battle, Janet succumbed to the virus. Due to visitor restrictions, Janet endured this battle without the support of loved ones, however, her attending physician, Dr. Blundell, and the entire ICU nursing staff, especially Amanda, provided Janet not only with exceptional care, but they also treated her (and all of us) as family. Janet was born on September 4, 1942 to Clayton and June Klein in North Tonawanda, New York. Janet graduated from North Tonawanda High School in 1960. She remained friends with “the girls” of her high school club all these years, including Donna Fickelscherer Elkin, a friend since 5th grade. Janet worked at Olin Chemicals, where she enjoyed being a union steward, from the mid 1970’s until Olin moved its production line out of state in the 1990’s. Janet fulfilled her life-long dream of becoming a teacher when she accepted a teacher’s assistant position at Niagara Orleans Boces. Janet continued to work at Boces until her retirement. Janet was a pioneer of sorts, being a divorced, single woman in the 1970’s she was able to secure a home loan on her own merit. She loved all plants and flowers and was an avid gardener who loved to show off her beautiful work to all her family and friends. Janet and “the girls from club” enjoyed traveling and attending many functions together. Janet is survived by brothers Kenneth (Carol) Klein and Karl Klein; daughters Michelle (Sam) Paonessa; Kathy (late Kenny) Strzelczyk and Marlene Tisak; 7 grandchildren (Kristin Skivington, Krystal (Josh) Woodhams, Jessica Paonessa (Corey Dahler), Stephanie Tisak, Tiffany Tisak, Sarah Strzelczyk and Dylan Paonessa). 9 great-grandchildren (Caleb, Brayden, Lily, Kenny, Ella, Lennon, Kaylee, Krissa and Kyra)), and many nieces, and nephews. She was preceded in death by both parents and her sister Donna (late Ed) Sigmund Funeral Services will be held at Wattengel Funeral Home, 533 Meadow Drive, North Tonawanda, Friday November 11, 2020 with Visitation from 5 to 7 PM and Services following at 7 PM. The Service will be live streamed on the Wattengel Funeral Home's Facebook Page. Due to the COVID pandemic visitation and services are limited to immediate family only. Private Interment will be in White Chapel Memorial Park, Amherst, New York.

The family of Janet J Ankenbauer created this Life Tributes page to make it easy to share your memories.

Send flowers to the Ankenbauer family.