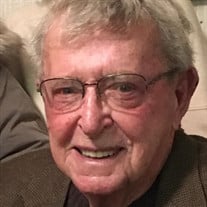 Ramsay, Dr. John Charles (Chuck) Of North Tonawanda, NY, entered into rest, after an active life, on April 17, 2021 at the age of 94. Beloved husband of Dianne Ramsay (nee Lebrenz) for 68 years; Loving father of Amy (Anthony) Ramsay, Susan (Daniel) Ramsay, Jack (Kathy) Ramsay, and the late Matthew (Rosemarie) Ramsay. He was also blessed with five grandchildren and nine great grandchildren. A lifetime native of North Tonawanda, Mr. Ramsay was the son of William L. (Pop) and Mildred Ramsay (nee Zimmerman). He was the brother of Mary (Kenneth) Hering, William (Geraldine) Ramsay, Vera (James) Oldenburg and Elizabeth (John) Wactawski. Mr. Ramsay was a WWII Navy veteran, who was stationed in China and helped to protect the country from Japanese and the Chinese communist invasions. At the end of the war, Mr. Ramsay attended Buffalo State College on the GI Bill. He captained the Bengals basketball team and earned a doctorate in Art Education. He was nationally recognized as a Teacher of Excellence for bringing the art experience to his students through unique projects which included science , nature and the outdoors. Mr. Ramsay also brought innovation and success to the gridiron, having coached varsity football for Tonawanda, Bishop Gibbons and North Tonawanda High Schools. His dedication to the youth of the Twin Cities spanned three decades and his legacy was honored in September 2016 by the North Tonawanda Football Hall of Fame. A member of the First United Methodist Church, Mr. Ramsay treasured a life that included his family, the arts, sports, nature and the contemplation of new ideas. Nothing thrilled him more than being the first youth to jump into the Erie Canal, going fishing on the Niagara River, perfecting his study of the human figure in pen and ink, golfing with his buddies from The Third Warders Social Club or cooking up Chuck’s Chowder (a secret recipe, of course!) for the annual family Fourth of July picnic. Relatives and friends may visit Wattengel Funeral Home, 533 Meadow Drive in North Tonawanda, NY on Thursday, April 22nd between 2-4 PM and 6-8 PM. A private interment at Acacia Cemetery will be held on Friday, April 23rd. If you wish, donations in J. Charles Ramsay’s honor may be made to riverkeepers.org. to assist in maintaining the ecological wellbeing and beauty of the Niagara River.

The family of Dr. John Charles (Chuck) Ramsay created this Life Tributes page to make it easy to share your memories.

Send flowers to the Ramsay family.