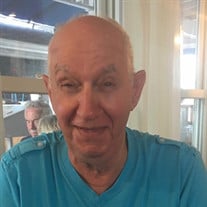 John A. Stefanucci 78 Of North Tonawanda on Sunday, November 28, 2021 in DeGraff Skilled Nursing Facility. John was born in North Tonawanda on October 4, 1943 to Anthony and Domenica (Mazza) Stefanucci. John was a United States Army Veteran who served in the Vietnam War, past member of the Teamsters Union, Past President and member of the Renaissance Club NT, bowler with the Wednesday Teamsters Retiree Group, in his spare time John loved golfing and a forever Yankee and Bon Jovi fan. John was predeceased by his brothers Ernest and Silvio Stefanucci. John is survived by his wife Noreen (Fill) Stefanucci, father of Michael (Heather), Thomas (Rebecca), brother of Rose (Anthony) Monaco, and Antoinette Tomassetti, grandfather of Colin, Dominic, and Olivia, also surviving are many nieces, nephews and friends. Friends may call Tuesday, December 7, 2021, at the Wattengel Funeral Home, 533 Meadow Drive North Tonawanda, from 4-8 P.M. where funeral services will follow. Interment will be held in Acacia Park Cemetery.

The family of John A Stefanucci created this Life Tributes page to make it easy to share your memories.

John A. Stefanucci 78 Of North Tonawanda on Sunday, November...

Send flowers to the Stefanucci family.