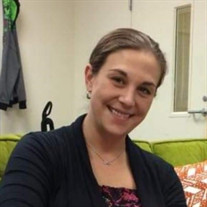 Kimberly Ann Sayles (nee Stiles), 41, of Charlotte, North Carolina entered eternal rest and was called home by her Lord and Savior on October 23, 2021 after a long and courageous battle with cancer. Kimberly was born on October 19, 1980 to Carl and Linda (nee Caradonna) Stiles of North Tonawanda where she lived and worked for the first half of her life. Kim attended St. Matthew Christian Day School (where she was honored with the Christian Citizenship Award), North Tonawanda High School, and Binghamton University where she received a Bachelors Degree in marketing. Kim worked locally at the Red Apple, Stange Insurance Agency and Superior Lubricants until moving to Charlotte where she secured a position as a Project Management Consultant for Liberty Property Trust. On November 20, 2010 Kim Married Scott W. Sayles, Jr. (formerly of Buffalo) and together they have two sons Max (10) and Syrius (7). Kim was also Step-mother to Scott W. Sayles, III of Buffalo and step-grandmother to Avanti Norman. In October of 2019 Kim appeared as a contestant on Wheel of Fortune and was also in the audience on Let's Make a Deal. She also enjoyed part-time work as a narrator and voiceover artist. Besides her parents, husband, and children, she is survived by her sister Debra (Nee Stiles) and Jeffrey Gorney, a niece Carlee, and a nephew Dylan, all of Cheektowaga, New York. The Family will greet friends at the St. Matthew Lutheran Church, 875 Eggert Drive, North Tonawanda on Saturday, November 6, 2021 from 1-3 P.M. followed by a funeral service officiated by Pastors Blaine Jorg, and Kenneth Craig. A trust fund was set up in Kim's memory for her children by Carl and Linda Stiles, If desired memorials may be made to the Kimberly's Children's Trust Fund.

Kimberly Ann Sayles (nee Stiles), 41, of Charlotte, North Carolina entered eternal rest and was called home by her Lord and Savior on October 23, 2021 after a long and courageous battle with cancer. Kimberly was born on October 19, 1980 to Carl... View Obituary & Service Information

The family of Kimberly Ann Sayles (Stiles) created this Life Tributes page to make it easy to share your memories.

Send flowers to the Sayles family.