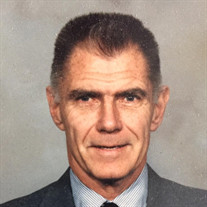 Melvin Harold Puscheck was born on September 25, 1930 to the parents of Reverend Arno and Elsie Puscheck in North East, Pennsylvania. Melvin is survived by his beloved wife Virginia Puscheck, having five children with three surviving sons: Steve (Linda), John (Katie) and Andrew. His son Jeff and daughter Anne are already with Jesus. Melvin had two sisters and a brother, survived by his sister Esther Lexow. Also surviving are 9 grandchildren, 8 great grandchildren with two more on the way. Melvin Puscheck (Mel) was a member of the North East High School Basketball Team in 1946 thru 1948. In the 1947-1948 basketball season Mel lead the team and Erie County League in scoring. He didn’t play high school baseball because his high school didn’t have a team. He played Legion baseball during his high school years. He was drafted by the Philadelphia Phillies to play baseball after completing high school but chose to forgo professional baseball and attended Valparaiso University. There, as a freshman in college, he played football, basketball and baseball. In sequential years at college he specialized in baseball only, where he set the school record for home runs his senior year in 1953. The Dodgers in 1953 offered him a second chance to play professional baseball, but his plans had changed and instead he married and started a family. He married Virginia Kleindienst on August 29, 1953, officiated by both his father and his father in-law (Reverend Kleindienst) at Redeemer Lutheran Church in Colden, NY. They recently celebrated their 65th anniversary. He was drafted into the Army in 1953 and was stationed at Fort Mead after training. He was to be sent overseas to Germany in 1954, but was granted a leave due to the birth of his first child. By the time of his return after the birth of his son, his unit had already been sent to Germany and he spent the rest of his service time at Fort Mead. He always joked that during this time there all he did was play baseball and learn how to type. Upon completion of his Military service he was hired to teach history at North Tonawanda High School in the fall of 1957. During his time there he coached both JV and Varsity baseball for a combination of 25 years, winning the league championship once and taking the team twice to the Section VI finals. He was the first bowling coach for the school in 1985 and continued coaching another eight years after his retirement in 1991. During his 34 years of teaching he touched the lives of thousands of students. For the rest of his life, former students were constantly coming up to him expressing their gratitude and appreciation for touching their lives. He was elected to his High School alma mater’s Hall of Fame in the summer of 2018. Mel had some very interesting side jobs, especially in his early years: Bowling pin setter Grape picker Tomato picker – he would get off of school to pick during harvest time Brewery worker Pohlman foundry laborer Construction worker on the New York State Thruway Surprise Service Station inspector for Ashland Oil Something remarkable and lifechanging happened to Mel and Ginny at the age of 40 when they gave their whole lives completely over to Christ. They always knew Jesus as their Savior but now they knew Him as Lord and their lives were never the same. Mel’s life was marked by faithfulness and love to his family, his church, his community, and his Lord Jesus Christ. He was a longtime member of St. Paul Lutheran Church where he served as elder, chairman of the board of elders, choir member, and Bible study teacher for many years. He was recently honored there for over 50 years of service to the congregation. Well done, good and faithful servant! You have been faithful with a few things; I will put you in charge of many things. Come and share your Master’s happiness! Matthew 25:23

Melvin Harold Puscheck was born on September 25, 1930 to the parents of Reverend Arno and Elsie Puscheck in North East, Pennsylvania. Melvin is survived by his beloved wife Virginia Puscheck, having five children with three surviving sons:... View Obituary & Service Information

The family of Melvin H. Puscheck created this Life Tributes page to make it easy to share your memories.

Send flowers to the Puscheck family.