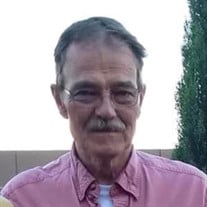 Robert “Bob” A. Miles passed on to the great unknown on Sunday, February 7th, 2021 after a brave, bitter battle with his own body. It is with great hope that he will learn the answers to many questions that have eluded him during his lifetime. Bob was born in Batavia, NY to N. Arthur “Art” Miles and Geraldine A. Feldman Miles. He was many things in his time, a farmer, a welder, an entrepreneur and inventor. For more than the last decade he had turned to his creative talents, reinventing himself again as a well known master preparator of fossils. Bob will forever be remembered in the world, as his work is scattered across North America with private collectors and public museums. He was well known for his loyalty, love of good conversations, his sense of humor, his strong opinions, his politics, and the love for his dog, Annie. His mark on this world also lives on with his five children that he loved passionately. His sons, Adam and Joanne Miles of Seymour, TN, Jonathan and Jennifer Bley of Henderson, NV, as well as his three daughters, Katherine and Darrell Smartt of Morrison, TN, Camie and Thomas Mantovani, of Lake Mary, FL, and Colleen and Bryan Roof, of Newark, NY. In addition, the light of his eyes still burns bright with his eleven grandchildren, Kayla, Adam, Christopher, Nicholas, Jarrod, Olivia, Sophia, Merrick, Nathan, Eric, and Daniel. In addition, he is survived by nine sisters, Joanie and Lenny Babel of Washington, UT, Pam and Ed Wilkolaski of Akron, NY, Kathie and Willie Griffin of Akron, NY, Teresa and Jim Mandolene of Akron, NY, Suzie and Raymond Schrock of Akron, NY, Peggy and Dale Berghorn of Akron, NY, Mary and Floyd Offhaus of Warsaw, NY, Christine and Jim Coffta of Oakfield, NY, Linda and Phil Myers of Floral City, FL, as well as his only brother Ben and Sandy Miles of Akron, NY. There will be no funeral or service, but a celebration of life will be arranged in late spring or early summer, the date to be announced at a later time. In memory of Bob, it is asked that in lieu of flowers, please visit our National and State Parks, museums, galleries, and observatories (when reopened) to remember the beauty and wonder of our universe; quit smoking, or donate blood and/or platelets to your local blood donation center.

Robert &#8220;Bob&#8221; A. Miles passed on to the great unknown on Sunday, February 7th, 2021 after a brave, bitter battle with his own body. It is with great hope that he will learn the answers to many questions that have eluded him during... View Obituary & Service Information

The family of Robert "Bob" A Miles created this Life Tributes page to make it easy to share your memories.

Robert “Bob” A. Miles passed on to the great unknown on Sunday,...

Send flowers to the Miles family.