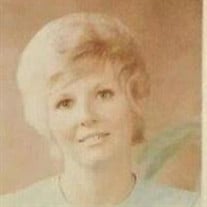 Shelda “Shelly” Marie (nee Woods) Jackson, of North Tonawanda, New York, passed away on January 10, 2022, at the age of 80. Shelly was born on August 11, 1941, in Niagara Falls, New York to Robert Burgess Woods and Irene Agnes (nee Murphy) Woods, an Irish Scot who came to the United Sates as an infant. She is predeceased by her brothers Bobby, Terry and Chuckie Woods and her beloved stepsister JoAnn Ziehm. Shelly is the most devoted and loving wife of her best friend, the late Steve Mason Jackson, III. She is the beloved mother of Tammy (Copella) Swatsworth. Most cherished and loving grandmother of Angela Marie Wright and Kristen (Sam) Felix and most loving and admired GG to Jordan Mason, Gianna Lynn, Mara Danielle-Paige and Michael Patrick. Dearest friend of Carolyn Clancy and Sandra Hess. Shelly had a natural talent for interior design and an eye for fashion and all of the latest trends. She enjoyed crafting, crocheting, attending Home Bureau classes and betting on the horse races. She especially enjoyed going to the movies and dinner with her granddaughters and great grandchildren throughout the years. She enjoyed watching her grandchildren and great grandchildren grow up, as she would often attend chorus concerts, basketball, football and softballs games, any school award ceremony, you name it, she was there. Shelly will be truly missed by all that have had the pleasure in knowing her. She will forever stay in our hearts. She is now reunited with her best friend, Steve. Friends may call Saturday January 29, 2022 at the Wattengel Funeral Home, 533 Meadow Drive in North Tonawanda from 12 to 2 PM at which time Services will be held.

The family of Shelda "Shelly" Jackson created this Life Tributes page to make it easy to share your memories.

Send flowers to the Jackson family.