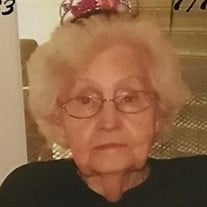 Verna Mae (Bowers) Webber 6/29/33- 7/7/17 Verna Mae was born on 6/29/33 in Big Run, Pennsylvania to Arnold Goodrich Bowers and Mabel (Payne) Bowers. She was always grateful to have two brothers, Earl and (William) Eugene, and one Sister (Edna) Lucille McLaughlin. Verna Mae was peacefully reunited with her parents and two brothers on 7/7/17. She is survived by her sister, Lucille McLaughlin (Herbert) of Colorado, Husband, James Webber, three children, Robert (Karen) Webber, James H. (Joan) Webber, Patricia (Webber) Russell, 7 Grandchildren, Julie (Dave) O'Neill, Dana (Tom) Waliszewski, James P. Webber, Sarah (Webber) Chapman, Zachary Russell, Hannah Russell, Christian Russell, and 5 Great Grandchildren, Madison Chapman, Max Waliszewski, Ella Waliszewski, Teagan O'Neill and Brennan O'Neill. Verna Mae grew up as a simple country girl who at the age of seven, stood on a box to reach the stove so she could cook for her hard-working family. Cooking and baking would remain her Art of choice. She created many masterpieces in the form of Apple and Banana Cream pies just to name a few. Verna Mae demonstrated throughout her life that a true apology is the absence of words and the enduring presence of rightful action. She often told the story of the one time as a child when she took change from a younger boy and threw it in a bush. The rest of her life she made amends by giving money to those in need with a request to "not pay it back but, pay it forward." Her kindness and selflessness was beyond measure. She insisted that material things were of no value to her which included no fanfare for her birthday. She was given a Sweet Sixteen (x5) birthday party on her 80th birthday much to her chagrin yet, no one deserved to be honored more for a life well-lived. Verna Mae will be missed by her family and all whose lives were brightened by her kindness.

The family of Verna Mae Webber created this Life Tributes page to make it easy to share your memories.

Send flowers to the Webber family.