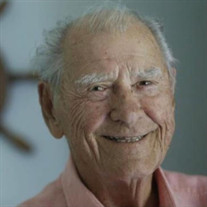 Walter T. Cholewa, 99 of Wheatfield, passed away Saturday (March 26, 2022). Walter was born in North Tonawanda on February 13, 1923 to Peter and Victoria Cholewa, Walter is one of 10 children. He was a Naval W.W.II veteran serving on the William... View Obituary & Service Information

If desired memorials may be made to Niagara Hospice in memory of Walter T. Cholewa

Send flowers to the Cholewa family.