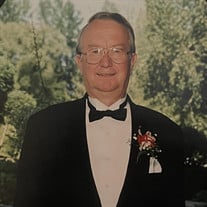 William F. Sawyer, 80, of North Tonawanda, Friday, (February 4, 2022) in the Erie County Medical Center. William was born in Buffalo, New York on April 15, 1941 to William and Edna (Hart) Sawyer. William retired in 1996 from North Tonawanda Public Schools as a 6th grade Teacher from Spruce and then Lowery Middle School, he was voted 3 times Who's Who in American Teaching, Catholic Educator of the year (Ascension Church), after retirement he was a tour guide for Over the Falls Tours. In his spare time he volunteered at The Riviera Theatre,  enjoyed gardening and was a avid Buffalo Bills fan. William was predeceased by his brother Richard Sawyer. William is survived by his wife of 26 years Marjory (Lawler) Sawyer, father of Kaitlin, Sheri, and Gregory Sawyer, Tammy (Todd) Cole, Lisa Welfare, and Michelle (Randy) Napierala, also surviving are several grandchildren, great grandchildren, nieces and nephews. Friends may call Wednesday from 2-4 and 6-9 P.M. at the Wattengel Funeral Home, 533 Meadow Drive North Tonawanda. Funeral services will be held Thursday at 11:00 A.M. from The Chapel, CrossPoint Campus, 500 Crosspoint Pkwy, Getzville, NY 14068.

The family of William F. Sawyer created this Life Tributes page to make it easy to share your memories.

Send flowers to the Sawyer family.